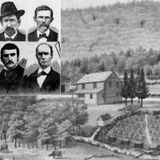 We have another Listener Submitted Script for you today!

The Blue-Eyed Six was a group of men who thought they had a foolproof plan to make money by taking out life insurance policies on an old recluse, named Joseph Raber.  Thinking he was frail and on the verge of death, they hoped for a speedy return on their investment.

This crime became an international sensation  in 1878. In fact, it was so huge, Sir Arthur Conan Doyle, the author of Sherlock Holmes, paid homage to the town and the sensational name given to the murderers in his short story 'The Red-Headed League'.

The Blue Eyed Six was researched and written by Listener Amie Felty
Listener Discretion by Edward October  from Octoberpod VHS
https://www.youtube.com/channel/UCZQk-oAsjZNG18y8bX24c6w
Producer, sound editor and music by Nico Vettese from  We Talk of Dreams
wetalkofdreams.com