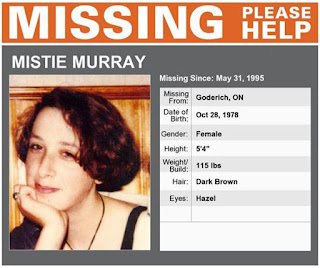 On the morning of Wednesday May 31, 1995, Mistie Nicole Murray, age 16, told her parents she would be home late because she had band practice after school. She put on her green nylon Marching Band with the lettering SDHS Girls Band jacket, with "Mistie" on the sleeve and sat in her dad’s red TransAm with the top down, smiling and telling her dad how she will have her driver’s license soon.  Her father, Steve ruffled her hair, made a bad joke about women drivers as Mistie’s mother climbed in the car and they drove off to school. She attended all her classes and even visited the school nurse for reasons that haven’t been made available to the public.  Mistie called her mother, Anne, at the elementary school where her mom worked. The call was made around 3:00 pm but her mother did not answer the call and Mistie didn’t leave a message. This was not unusual as her mom was often busy especially at the end of the school day. What was unlike any other normal school day, Mistie never made it back home.
Join Jen and Cam as we discuss Missing Mistie Murray on this episode of Our True Crime Podcast.


Promo by: This Week in Crime Podcast @thisweekincrime

As always our two BFF's are repping us:
Listener Discretion by Edward October from @Octoberpod Home Video
Stellar Editing and All Music by Nico from @wetalkofdreams 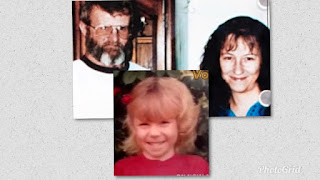 Located about 90 miles north of Little Rock Arkansas is a little area called the Illinois Bayou. It has everything that you would think a bayou would have: bogs, marshes and a very prehistoric kind of feel. Locals as well as visitors flock to the area to hit the water and see what kind of goodies they can reel in but sometimes the things that they catch on the other end of the line, is something no one would expect or want. That is exactly what happened, when a couple out for a day of fishing, reeled in a ghastly sight: a body part. Authorities rush to the scene and what they would uncover would only leave more questions and unveil a hidden sect of people who's strong beliefs include anti-government but does it also include murder?
Join Jen and Cam on this edition of OTCP as we discuss Brotherly Love: The Kehoe Boys.
Listener Discretion by the voicely talented Edward October of @octoberpodVHS
All music and editing by the guy who puts up with us way more than any person ever should have to do: Nico @wetalkofdreams 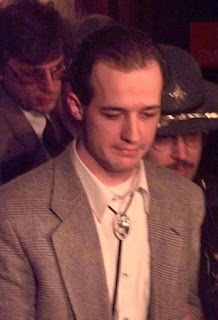 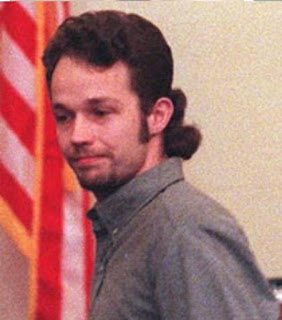 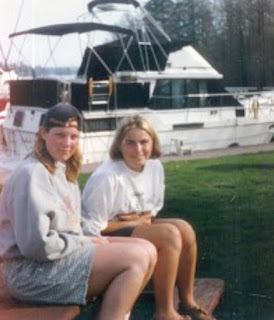 Bermuda, is England's oldest surviving colony. With the beautiful brightly colored houses darting the shores, the pink sandy beaches welcome vacationers from all over the world.  So when 16 year old Becky Middleton hears about how gorgeous this dream like paradise destination is, she knows where she is going on her summer vacation. Middleton, and her best friend Jasmine Meens, had decided they were going to spend the summer there after school was out in June 1996. They wouldn’t be alone on the island as Jasmine’s dad was now living there after getting remarried. It was a dream come true for any teen girl but the dream would soon turn into a nightmare for all those they knew and loved young Becky.


Join Jen and Cam on the final OTCP Summer Blast episode entitled Bermuda, Bikers and Blood.
Promo is by @IWBpodcast

All music and editing by our pal across the pond Nico @wetalkofdreams
Posted by jen at 5:46 PM 1 comment:

Evil on the Oceanfront Summer Blast #4 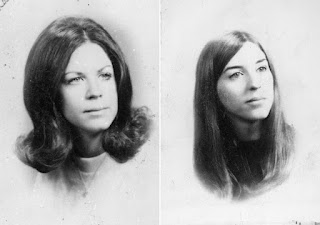 Best friends Lynn Seethaler and Janice Pietropola had graduated together from the Penn Hills High School and with their newly found independence and financial freedom, Janice and Lynn decided they would take a nice little vacation together. 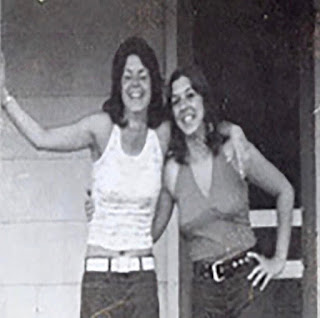 The last week of June 1973, the two young, vibrant ladies set off on a road trip to Virginia Beach. The two had rented a small cottage at Farrar’s Tourist Village, which was a small complex of vacation rentals right on the oceanfront. 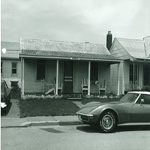 A bit after noon on June 30, the two women missed their checkout time. A motel employee went to the cottage to check on them.  Inside they found a bloody scene and both girls were found dead. Decades would pass before the person responsible for this would be discovered but was there even more?
Join Jen and Cam on the OTCP Summer Blast episode entitled Evil on the Oceanfront. 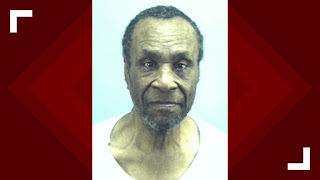 Various articles from The Pittsburgh Press,Pittsburgh Post-Gazette, The Danville Registar, The Bee & The News Leader via Newspapers.com
NYTimes
The Virginia Pilot on line
City of Virginia Beach 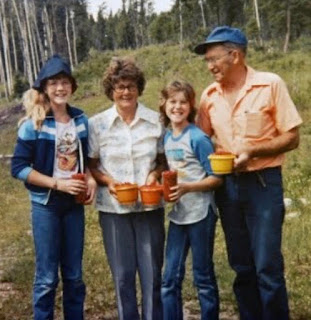 It was Sept 13, 1982 when Detective Mike Eastham was summoned to a campsite in Wells Gray Park Provincial in Britt Columbia, Canada. Eastham was not quite sure what he was going to find but had been told there was a fire and they had discovered one body at that point. Once on sight, they located a car that was burned badly but there was no mistaking the bone fragments inside the car and those bones belonged to humans. Not  quite sure if there were one or two bodies inside the vehicle but they weren’t finished. Once the trunk was opened, the shock hit hard as two small skeletons were inside. Who would want this loving family dead? The answer would shock everyone.


Join Jen and Cam on episode 3 of the OTCP Summer Blast series entitled The Campfire Killings.

Promo by Pretend Radio @Pretendpod
Posted by jen at 5:29 PM No comments:

On June 3, 1971, 13-year-old DeWayne Bush was reported missing from his home in Union Mills, Indiana. Police just suspected  he was a runaway. Three months pass when a deer hunter came across skeletal remains. It was confirmed to be DeWayne Bush. DeWayne’s death would not be solved for 12 years but, sadly, he would not be the last to be brutally murdered by a man who was able to blend in among the community.


Join Jen and Cam on episode 2 of the OTCP Summer Blast series entitled The LaPorte Indiana Strangler.
Promo by Things That Keep Me Up At Night @ttkmeup 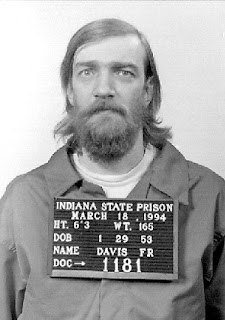 Stolen in the Night Summer Blast #1

Summer Blast #1: Stolen in the Night
Camping is a family tradition that goes way back. It is a cheap way to bond and see the country and that is just what the Jaeger family wanted to do when they set off to Montana from Michigan. 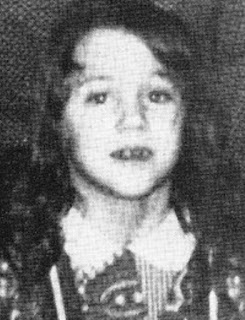 It was Sunday June 24 and they were spending their last night in Montana’s Headwaters State Park. It was around 4am when 13 year old Heidi Jaegar woke up to some chilly air. There was a hole in the tent-a big hole. Heidi felt around the sleeping bag for her 7 year old sister, Susie, who was sleeping in that spot but it was only a sleeping bag. The family's dream vacation would turn into a very long nightmare. Police would apply a method that was unheard of in the early 1970's to help in the case.

Join Jen and Cam as we discuss episode 1 in the Summer Blast series entitled Stolen in the Night on today's episode of Our True Crime Podcast.

Promo by the Bad in the Boondocks podcast.

Listener Description by the hauntingly handsome Edward Octoberpod from @OctoberpodVHS

All music and editing by the stunningly stylish Nico from @wetalkofdreams
Posted by jen at 5:24 PM No comments:

41. Where Have You Gone Mr Robinson

Kansas City, MO
It was the summer 1984 and a local business man advertised for a sales representative secretary. 19 year old Paula Godfrey applied for the job and was thrilled to get the position. She was anxious to start her career with the hopes of it giving her the step up she needed. As Paula left the house, her smile was beaming as she waved goodbye to her parents. It would be the last time her parents would see that smile. Sixteen years later a knock upon a Kansas front door would unleash a secret horror story that only Stephen King could create. 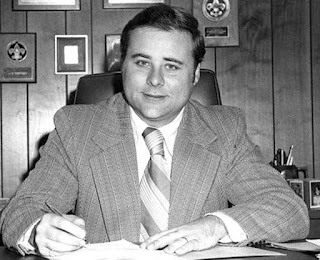 A man and woman are found is dead inside a home. 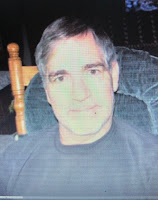 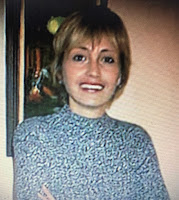 Another man is found dead in a car parked outside of the house. 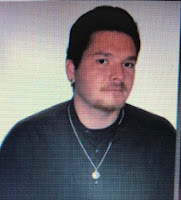 The only things missing are a wallet, cell phone and computer tower.

The digital age brings us a lot of cool stuff, unfortunately it can also lead to murder. 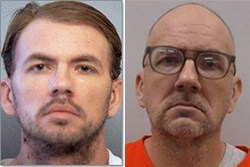 Music, editing and sound are all expertly done by the very talented Nico of We Talk of Dreams.