On April 17, 1974, a seventeen-year-old girl in Stuttgart, Germany, was visiting her boyfriend. After saying her goodbyes, she left for the train station at around 12:30 am. Along the way, a Fiat with three passengers pulled up beside her to ask for directions. These men, who were US Army soldiers, asked the girl for directions and offered her a ride home. The girl thought that the three were trustworthy. Sadly, her instincts were very quickly proved wrong. One of the men sprung a knife on her, and they drove to a remote location to sexually assault her. All three of the men raped her, and one of them took photographs during the attack. Ingrid was brought back to the car and finally dropped off at home. Ingrid, thinking on her feet, pretended that she was interested in the men, coaxing them to give her a phone number so she could get back in touch with them later. One of them fell for it and agreed, giving her his number. This man was 21-year-old Lonnie David Franklin Jr, a US army private cook stationed at the Kelley Barracks in Stuttgart. Ingrid didn’t know she was not the only victim of the three men that night or that this man would go on to become one of the most prolific serial killers of all time in America. 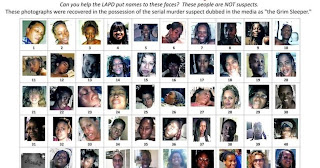 The photos of the unidentified women suspected to be victims of Franklin are available to view at the following link: https://www.cbsnews.com/pictures/grim-sleeper-serial-killer-suspects-secret-photos/9/. Anyone with information about these women is asked to call 1-877-LAPD-24-7.

Written and Researched by Jesse Hawke