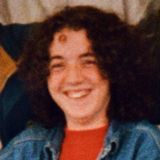 Warning: This episode contains extreme domestic violence.
In 1993, Kelly-Anne Bates was just an English teenager who at 14 years old was babysitting for friends when she met a man named James Smith. James, at age 46, was 32 years older than Kelly and he set his sights on her and immediately began grooming her. Kelly, young and naive, had no idea about his previous abusive relationships and fell for him quickly. Kelly worked hard to keep the relationship a secret from her parents, Tommy and Margaret Bates, whom she knew would not be happy and managed to do so for two years.
Join Jen and Cam as we begin Day 1 of 12 Nightmares before Christmas and discuss the murder of Kelly Anne Bates.
That special Holiday Listener Discretion is by the Holly Jolly Edward OctoberpodVHS @octoberpodVHS.
Those fabulous melodious melodies are by none other than our favorite elf, Nico from @wetalkofdreams.