66. The Slayer's Book of Death 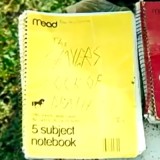 On July 29, 1993, law enforcement authorities were alerted to a crime scene where they found two bodies in a field near Tellico, in Ellis County, Texas. The first body discovered was that of a nude decapitated girl whose hands were also missing. It looked like she had been shot in the back as well. Her body was badly mutilated.
While officers were looking around for the rest of her missing parts, they
discovered another body of a boy.  It looked like he had been shot but unlike the girl, his body was intact. The boy had a wallet in his pants and a library card let authorities know his name James Bryan King.
The two teens were brutally murdered by a suspect who was supposed to be their friend. This friend, however, had more than a few secrets and obsessions.
Join Jen and Cam on today's episode of Our True Crime Podcast entitled "The Slayer's Book of Death."
LD by Edward October from @octoberpodVHS
Original music and all editing by Nico @wetalkofdreams